To share your memory on the wall of William Buchanan, sign in using one of the following options:

Print
William Moulton Buchanan, 79, of Decatur, passed away on October 31, 2020, at a Chattanooga healthcare facility.
Known as “Bill” or “ Bill Buc” to those who knew him, he was a lifelong resident of Meigs County. He was a 1959 graduate ... Read More
William Moulton Buchanan, 79, of Decatur, passed away on October 31, 2020, at a Chattanooga healthcare facility.
Known as “Bill” or “ Bill Buc” to those who knew him, he was a lifelong resident of Meigs County. He was a 1959 graduate of Meigs County High School. Bill attended East Tennessee State University.
Bill’s career began in 1963 with Volunteer Energy Cooperative, and his entire career until his retirement was spent with VEC. He began as an accountant and received various promotions to office manager as well as to manager of finance and administration before being chosen to lead the helm of the Cooperative as CEO/President in 1982. He served as CEO/President until his retirement in June of 2005. While serving at Volunteer Energy Cooperative, Bill served on various committees and boards of the Tennessee Electric Cooperative Association (TECA), the Tennessee Valley Public Power Association (TVPPA), and the National Rural Electric Cooperative Association. During 2003 to 2004, he served as President of the Board of Trustees of the TECA. Further, Bill served continuously as chairman of the Tennessee’s Job Training and Safety Committee beginning in 1985 until his retirement in 2005. One of the highlights of his career was receiving the TVPPA Richard C. Crawford Distinguished Service Award.
In addition to his professional career, Bill served his community and supported the Meigs County community. He served as the Mayor of Decatur from 1975 to 1983. He was a former board member of United Way of McMinn and Meigs County serving in that capacity from 2009 through 2014. He was a member of the Scottish Rite, Alhambra Shriner, as well as being a member of Meigs Lodge No. 213 F.&A.M. for more than 50 years.
Bill was a co-owner of Southern Hydraulic Cylinder, Inc. Additionally, he previously served as the chairman of the board of directors of Meigs County Bank. Subsequently, Bill became an organizing director of SouthEast Bank and Trust.
Bill was a dedicated member of Decatur United Methodist Church. He served as Chairman of the Administrative Board, was a former Men’s Sunday School Teacher, and member of Kitchen Sunday School Class. In his wallet, he carried these scriptures with him at all times: “If God be for us, who can be against us” and “I can do all things through Christ which strengthen me.”
Even though Bill had a full professional career and served in so many ways, he had no greater love than that for his family, and he was treasured and adored by his family. Bill was passionate about his family, and he loved and supported his wife, Barbara, his children, and grandchildren in every way. When Bill experienced health struggles, the greatest care and love was provided for many years by his wife, Barbara. So long as he was able, he never missed a golf match, a ballet recital, church play or performance, or basketball game of any of his four grandchildren whom adoringly call him “Buc.” The highlight of each year for Buc was the annual family vacation with his wife, children and grandchildren to St. George Island, Florida.
Bill was predeceased in death by his parents, Carter Ewing Buchanan and Mary Lee Moulton Buchanan, and his sister, Carolyn Sue Buchanan Runyan.
Bill is survived by his wife of 55 years, Barbara Jennings Buchanan of Decatur; his children, Paige Zabo, and husband, Jeff of Athens, and son, John Buchanan, and wife, Ginger of Cleveland; grandchildren, Will Zabo, Connor Zabo of Athens, Maggie Buchanan and Mary Buchanan of Cleveland; and his sister, Sarah Carter Volkmann of Hope Mill, NC; and several nieces and nephews.
As much as the family would like to reflect upon and celebrate Bill’s well lived life, a celebration of Bill’s life will be held at Decatur United Methodist Church, at a later date to be announced due to COVID-19 concerns. A private graveside service will be conducted at Decatur City Cemetery.
Pallbearers will be Carter Runyan, Neil Moulton, Steve Miller, J.E. Wilson, Gene Wade, Will Zabo, and Connor Zabo.
In lieu of flowers, the family requests that memorial donations be made to Decatur United Methodist Church, P.O. Box 1255, Decatur, TN 37322.
Read Less

To send flowers to the family or plant a tree in memory of William Moulton ""Bill Buc" or "Buc"" Buchanan, please visit our Heartfelt Sympathies Store.

Print
Date and time of Memorial service is pending.

We encourage you to share your most beloved memories of William here, so that the family and other loved ones can always see it. You can upload cherished photographs, or share your favorite stories, and can even comment on those shared by others.

Posted Nov 04, 2020 at 10:22am
So sorry to hear of Bill's death. Gone is the body but the memories will last forever.
Comment Share
Share via:
T

Posted Nov 03, 2020 at 10:59am
Barbara, Paige, John and family.... So sorry for your loss. My prayers and thoughts are with you all during this time of loss. I have known Bill for a long time, enjoyed working for him. I had a lot of respect for him and lots of good memories here at VEC . Bill was always good to me and i have never forgotten that ... Again, prayers and my love go out to yall.

Posted Nov 03, 2020 at 07:04am
So sorry to hear of Bill's passing, please know you are in our thoughts at this time. Bob & Georgia Lamb
Comment Share
Share via:
SW 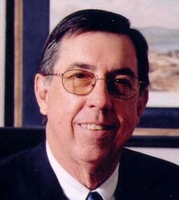